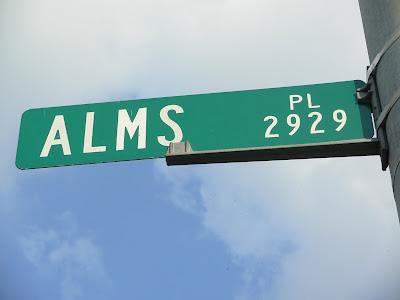 Frederick H. Alms, the namesake of Alms Place, is at a minimum a well known name in Cincinnati. But other than his association with the former Alms & Doepke Department Store that he started with his brother and a cousin and Alms Park, many may not know much about the man himself.

Frederick H. Alms was born in Cincinnati on February 26, 1839. His parents, Gerhard & Louise, came to Cincinnati in 1827 from Germany. His father was a cabinet maker and prior to opening his own shop at Race & Liberty Streets in Over the Rhine, Gerhard worked in a number of Cincinnati furniture companies including Mitchell & Rammelsberg. He had one younger brother to live to adulthood, William H. Alms (1842 – 1890), with whom he would later form a thriving business. He and his brother were educated in Cincinnati public schools and graduated from Woodward. After graduation Frederick began his career in the retail business including working for a time in his uncle August Alms’s dry goods store.

At the beginning of the Civil War in 1861, Frederick Alms enlisted in Company D of the 6th Ohio Volunteers. His brother would eventually join Company E and their cousin William Doepke enlisted in Company D of the 6th Ohio Volunteers as well. The 6th Ohio first saw action in the Virginia but after three months, Alms’s enlistment expired. However he re-enlisted back in to the 6th Ohio Volunteers and they moved to the Western Theatre. In 1863 Frederick Alms was mustered in as a Sergeant to the Signal Corps of the U.S. Regular Army. He had enlisted as a private. He served in the Western Theater with the Army of the Cumberland and battles included Chickamauga, Lookout Mountain, and Chattanooga. Before Sherman’s March to the Sea, he was honorably discharged on June 17, 1864 as his three years of service ended. The entire 6th Ohio was mustered out a few days later on June 23, 1864.

In 1865 brother Frederick and William along with their cousin William Doepke formed the Alms & Doepke Department Store, each owning one-third of the business and each getting a loan from their parents. Their first store was at No. 470 Main Street (old numbering) in Over the Rhine. The business was a quick success and they soon were all able to repay their parental loans.

In 1878, the Alms & Doepke Department Store relocated to the NE corner of Main Street and the Miami & Erie Canal. Growth continued with a number of expansions in 1886, 1890, 1897 and 1906. Samuel Hannaford and Sons designed the first building along with the early additions. Daniel Burnham of Chicago was the architect of the 1912 addition along Sycamore. It became one of the largest department stores in the Midwest. 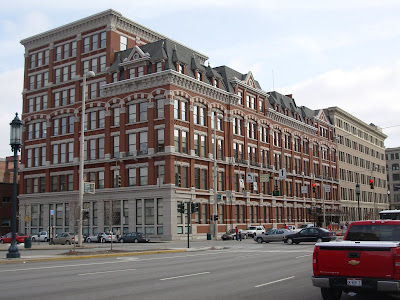 Frederick Alms after the Civil War lived on Clark Street (as did Doepke). He would eventually settle though in Walnut Hills, erecting a home (designed by Hannaford) at the NE corner of East McMillan and what was then Elm or Elmwood Avenue. (More on that street and location later!) He was a founding member of the Evangelical Lutheran Church in 1888 whose church, erected in 1891 and designed by Hannaford, still stands at the SE corner of Stanton and William Howard Taft. Frederick’s brother William and William Doepke would settle in Avondale. 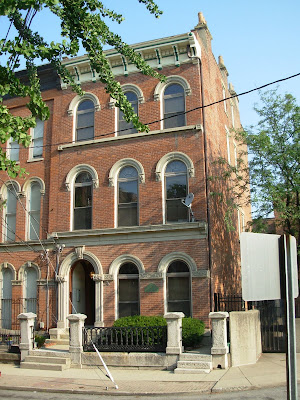 Besides Frederick’s business accomplishments, he was very active in the community. Very active. He served on boards as varied as the German Kindergarten Association, the College of Music in Over the Rhine, the Music Hall Association, and Cincinnati Hospital where he served as time as President of the board. He was a director of Baltimore & Ohio Southwestern Railroad and a trustee of Cincinnati Law School. He gave funds to the YMCA, the Bodman German Protestant Widows Home, and the German Old Men’s Home. He once gave $1000 to the 50th anniversary of the Sangerfest. He was a member of the Queen City Club, the Cuvier Club, the Lincoln Club, the Optimists, and the Young Men’s Blaine Club.

In 1891 he had the Alms Apartments was built on the NW corner of East McMillian and Elm, opposite his home, as a business venture. Like his house it was designed Samuel Hannaford & Sons. (The Legacy of Samuel Hannaford also mentions another apartment building built by Alms but I do not know the name.) The apartment building later became the Alms Hotel. (A still standing annex building, erected in 1925, was designed by Harry Hake.)

A brief but fantastic biography of Frederick Alms in Cincinnati, The Queen City, 1788 – 1912 from which much of this history comes, mentions a 1894 – 1895 trip around the world he and his wife took his wife’s brother and his wife. Upon their return they were greeted by a who’s who of Cincinnati.

On July 25, 1898, Frederick Alms dies. His wife Eleanora becomes owner of the Alms Hotel and before her death in 1921 makes a number of donations to various Cincinnati institutions. She gave $100,000 to the College of Music in 1902. (She also suggested a plan for the College of Music to join UC which they wouldn’t do for another fifty years or so. However Alms Hall at DAAP is named for both she and her husband.) From about 1918 to 1922, she donated money again to the College of Music to erect Alms Hall, a new dormitory just south of Music Hall. She tried to donate $100,000 for a statue of Lincoln but there was controversy and she eventually withdrew her offer and Mr. and Mrs. Charles P. Taft commissioned George Grey Barnard to design the statute "Lincoln - The Man" now in Lytle Park. (Mrs. Alms’ designer of choice was Gutzon Borglum and there is a whole JSTOR article on what happened.)

Her biggest donation however was to the Cincinnati Park Board in 1916 for Frederick H. Alms Park in Mt Tusculum. As a memorial to her husband, she donated about sixty acres of land plus money for the purchase of approximately another sixty acres of land which was once owned by Nicholas Longworth for his vineyards. As the value of the surrounding land increased, the park was never able to purchase all it had initially intended and Alms Park, as most know it, now includes 94 acres. 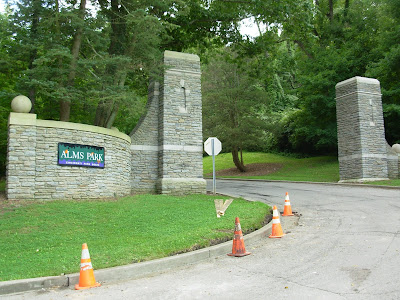 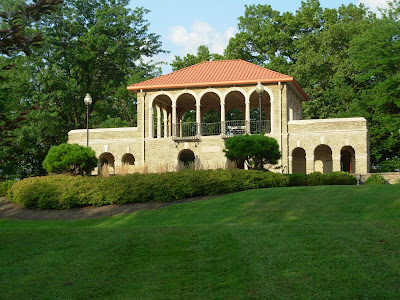 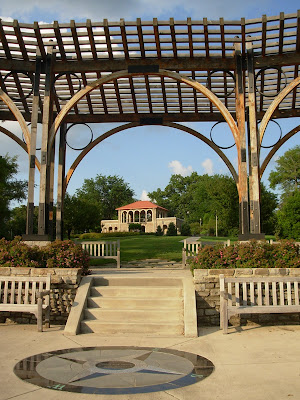 Frederick Alms and his wife are buried on a prominent site in Spring Grove Cemetery in Section 20, Lot U. 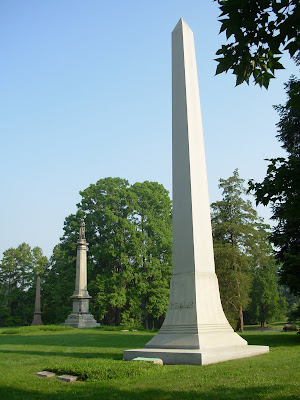 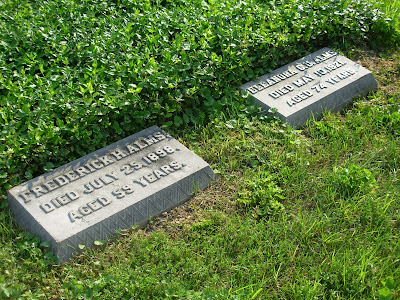 So Alms Place . . . Well, shortly after Alms’s death in 1898 when I found a map with the new name, Elm or Elmwood Avenue in Walnut Hills was changed to Alms Place. Named for Frederick Alms who gave so much to Cincinnati and who had made his home in the neighborhood. Eventually though, part of Alms Place was then replaced with Victory Parkway. Construction of Victory Parkway began in 1911 and was ultimately completed in 1930. South of East McMillian the street is entirely new as no street existed there prior. The Park Avenue Bridge going over to Eden Park was rebuilt in 1917 to carry Victory Parkway. North of McMillan, however Victory Parkway used the right-of way of Alms Place until it veers northeast at Yale Avenue. And Alms Place remains as a street name from Yale north to just above Martin Luther King Boulevard. (Madison Road was extended west of Woodburn Avenue in 1929 to meet up with the new Victory Parkway. Ultimately a road was extended further west, all the way to Central Parkway and renamed after Martin Luther King. 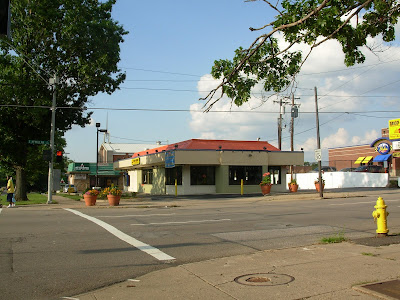 Site of the home of Frederick Alms 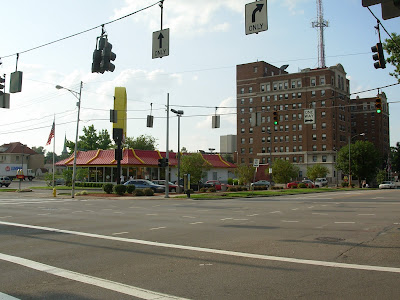 Site of the original Alms Hotel. Alms Hotel in distance and below. 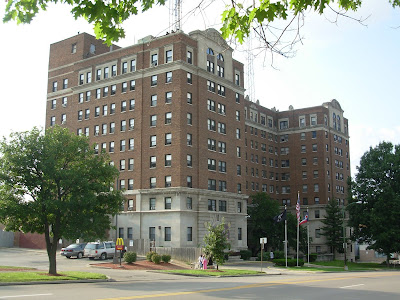 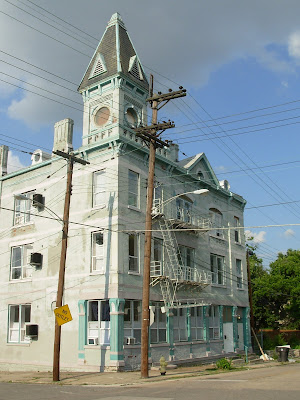 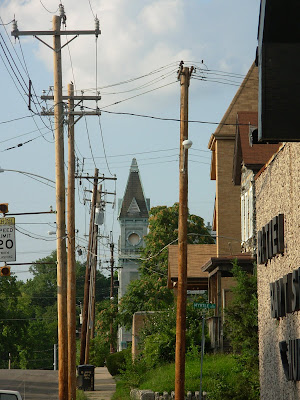 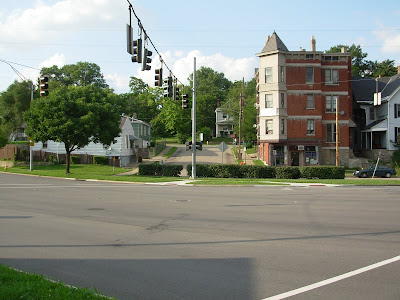 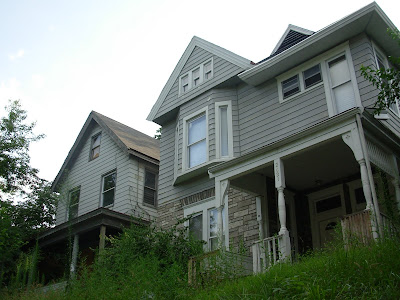 ‘Walnut Hills Month’ is a multi-part series documenting Walnut Hills and ending with the ARCHITREKS walking tours of Walnut Hills on August 29 and 30.

My god, I haven't thought about Alms Park in years. As a child my mother would take me there and we would spend hours sitting in clover patches searching for the 4 leafed variety. When she or I would find one, it was as if they truly were magical. She would get all excited and tell me of their magical properties. Exclaiming that one fortunate enough to find these lucky emblems would sustain youth and beauty throughout their life. That was more than 40 years ago. Perhaps it was true...when my mother passed away in 2003 people from other funerals asked if they could view my mother as they had never seen and elderly woman look so young. Myself close to fifty...it is rare that anyone ever guesses me beyond thirty-five. Anyway, thanks for such a fond memory!

My father bought The Alms in 1966 I have soooo many fond memories. It definatly was a classic