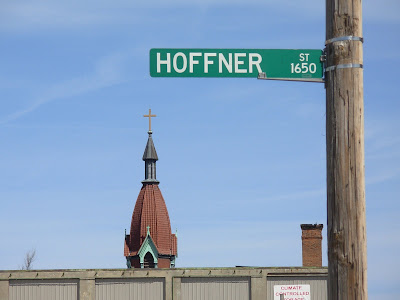 Jacob Hoffner was born August 4, 1799 in Mercerburg, Pennsylvania. He eventually came to the Cincinnati area in 1805 and by 1836, purchased the Hutchinson Tavern at what is now Blue Rock Road and Hamilton Avenue. He would eventually purchase about 50 acres of land around Cumminsville. Eventually he moved to Cumminsville from Mt. Healthy, tearing down the tavern and building his estate there on six acres. He sold or developed the remaining property and amassed a fortune. 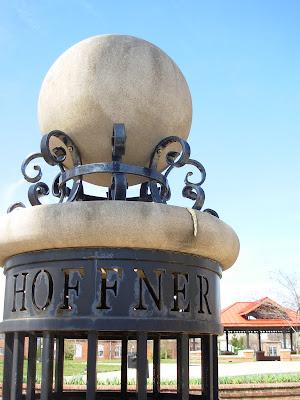 For instance, Hoffner was a Mason and he donated land to the Cumminsville Masons for a Lodge which was later named in his honor. Hoffner Lodge was designed in 1885 by Samuel Hannaford and Sons and completed in 1886. 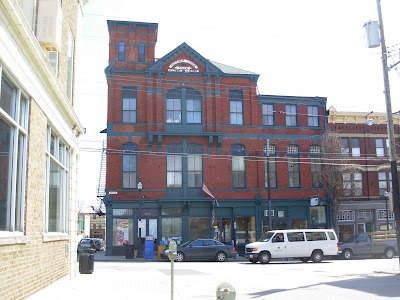 Land for the Cincinnati, Hamilton & Dayton train stain in Cumminsville was donated by Hoffner. The rail line generally ran east-west and crossed Hamilton Avenue below Hoffner’s estate. I believe the station was east of Hamilton Avenue where the former Myron Johnson Lumber Company was located.

The original St. Boniface Parish purchased some of their land at Blue Rock & Lackerman from Hoffner for their church and school (now demolished) which was completed beginning in 1863. All of the land for St. Patrick’s Church, completed in 1873, was purchased from Hoffner.

And north of both churches, eleven acres were donated in 1855 by Hoffner to erect the St. Joseph Orphan Asylum on what is now basically Chase Elementary and the McKie Recreation Center.

It is noted in one record that he also owned a tin, copper, and ironware company but Hoffner was also an avid traveler and horticulturalist. He took many trips to Europe, amassed an extensive sculpture collection, and developed lush gardens around his home. His holdings included Apple and Cherry orchards which is how Apple & Cherry Streets in Northside were named. His gardens included a lily pond and a large greenhouse where he grew palm trees and how Palm Street in Northside was named. One palm specimen was displayed in the Centennial Exhibition of 1876 in Philadelphia. 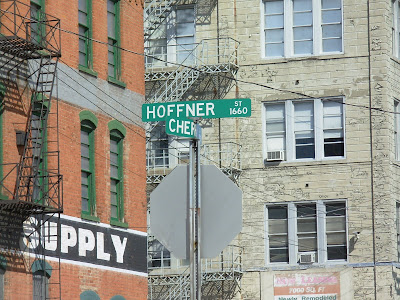 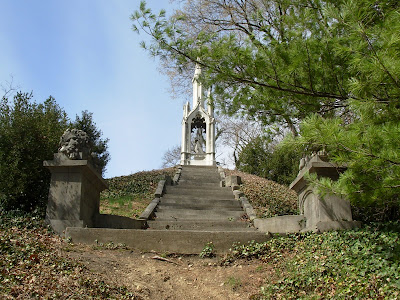 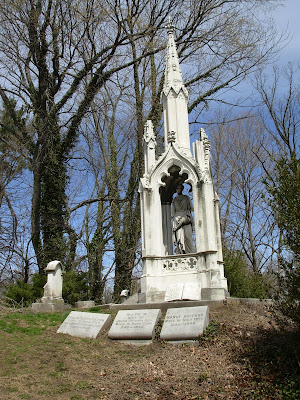 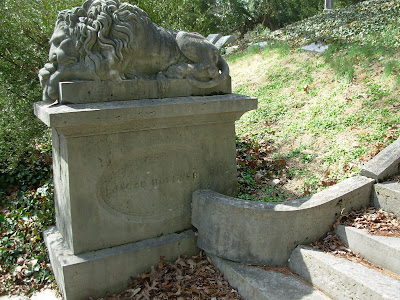 His will stipulated he wished his estate to be developed as a park and that the interior artwork go to the Art Museum and the exterior sculpture given to the City of Cincinnati. So after his wife Maria died in 1901, and the estate settled, the home was demolished in 1904. A park was developed which would eventually be named Hoffner Park. And indeed two lions, copies of a famous pair of lions found in the Loggia dei Lanzi in Florence, which once guarded the estate found their way to the City owned University of Cincinnati. Now name Mick and Mack, they stand on either side of McMicken Hall. 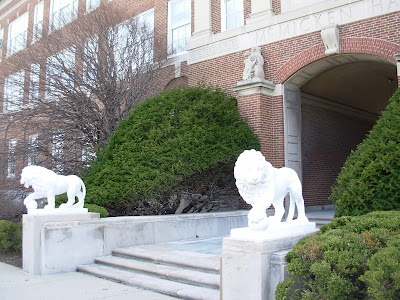 Hoffner Street radiates from Knowlton’s Corner at the intersection of Spring Grove and Hamilton Avenues. It extends due west, past the southern edge of Wesleyan Cemetery until it dead ends due to I-74. It is a curious street of both residential and industrial buildings. As I can tell, Hoffner Street was the south edge of Mr. Hoffner's land holdings. The oldest existing properties there were built after 1880 with many of the industrial buildings dating from well past the turn of the century. 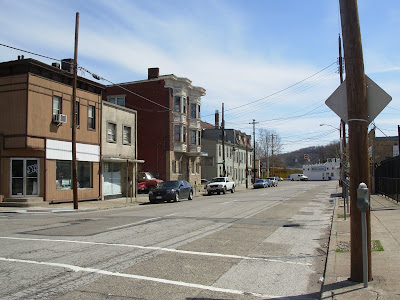 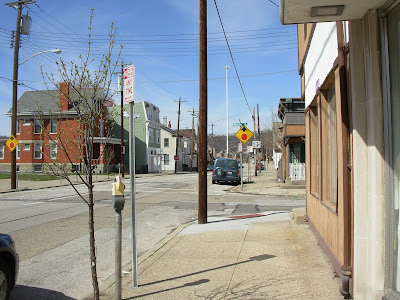 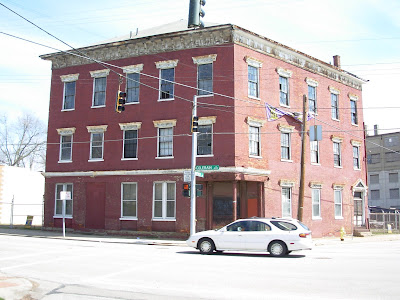 Hoffner Avenue may not be much now, but much of what is now Northside owes much to Jacob Hoffner.
References:
History of Cincinnati and Hamilton County
Grace, Kevin. "Is Mick the lion on the left or the right?" UC Magazine
Historic photos from Library's Cincinnati Memory Project.
Posted by Dan at 8:17 PM

Thanks for the history lesson. That was cool. I don't know that much about this area, and it's always good to learn something new.

That was an awesome post. I appreciate this city more and more the more I learn about it. Thanks!

Excellent research; love this post. I often wonder how streets (and most other things, for that matter) got their names.

There's so much history behind place names. In my "Cincinnati History Moments" series of posts I like to highlight people whose names we now recognize as places.

Excellent post. ...And I thought I knew a lot about Northside / Cumminsville already.

I love rich people who donate amazing things for the betterment of their community.

Great post! I've lived here 25 years and never heard this story. How do you know all of this stuff, anyway?

Thanks so much for doing such excellent research - I learn something everytime you post. :)

Keep up the great work!

It seems this blog is long-dead, but a recent spurt of genealogical googling/amateur research led me here.

I'm Jacob Hoffner's great-great-great niece, and know very little about this side of the family (nor do I know much about Cincinnati - I've never visited!), so it's very cool to run across this piece. An original Hoffner Estate postcard (2nd image down) has been framed in my parents home since I was young, it's amazing to see it on a stranger's website and nice to find out about the Cincinnati Memory Project.

If you have any additional information on the Hoffner family that you'd be willing to share, I'd love to be in touch.