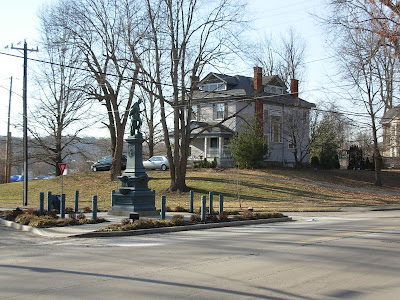 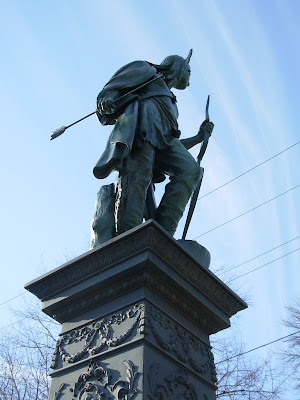 J. Fitzhugh Thornton was a prominent citizen of Fernbank, the Village that was founded by Charles Wilkins Short (September 15, 1851 – April 26, 1926) and incorporated in 1888. John was born January 21, 1842 in North Bend, Ohio. He moved his family to what would be Fernbank and was a member of their first village council. Their Colonial Revival home at 95 Thornton Ave, directly west of the statue and park, was built in 1891. Fernbank was eventually annexed to the City of Cincinnati in 1912 shortly after the completion of the Fern Bank Dam in 1911. 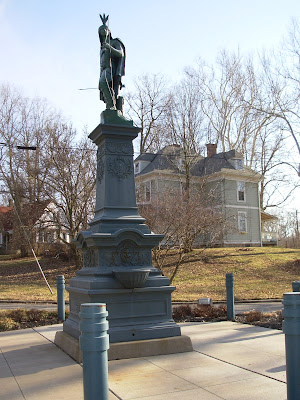 The statue was cast by the J. L. Mott Foundry after a design by Samuel Anderson Robb. The original Indian figure was zinc with a cast iron base. The J. L. Mott Iron Works made a number of iron and zinc fixtures, furnishings, statues, fountains, etc. The company was founded in 1856 by Jordan L. Mott on the Harlem River in New York City. The Mott Haven neighborhood of the Bronx was named after the man and factory. Jordan Mott invented the coal burning stove. One article indicated they also supplied some of the cast iron for the Statue of Liberty. His son, Jordan Mott, Jr., grew the company and expanded the product catalogue to include a wide variety items like bath tubs and sinks, along with statues and fountains. The company produced a number of statues including some military soldiers in addition to the Indian figures. I have seen a reference that the J. Fitzhugh Thornton Memorial was actually catalogue item "Indian Chief No 53" and a similar statue stands in the National Park Seminary District in Forest Glen, Maryland. They say they are the same . . . but I am not sure.

Hiawatha Statue in Bethesda, MD
While not exactly grand, I find the statue and setting quite charming. It is not on the National Register, however it is a Local Historic Landmark. It was damaged twice by cars over the years and even sent to a scrap yard for a time before the community raised funds to bring it back. The statue was extensively repaired in 2002 and actually re-cast in bronze. The "new" statue was re-erected in late 2002, it was re-dedicated in 2003. I’d like to stop back in spring when the trees and flowers are in bloom. I think I’ll get better pictures. 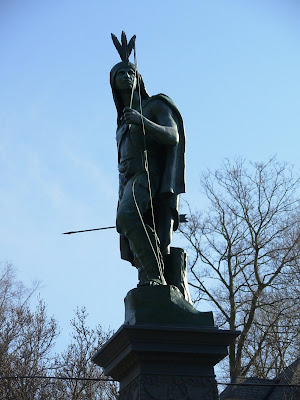 Eliza Thornton passed away in October 1927, and was buried next to her husband in Spring Grove Cemetery, Section 29, Lot 144. Their headstones are simple and unassuming. And their lasting memorial really is the quaint little statue and park in Fernbank. 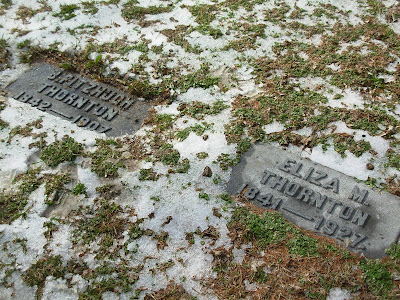 I would also like to note that this is not Greater Cincinnati’s only Indian statue. On Riverside Drive in Covington, part of the Northern Kentucky Riverwalk, is the Chief Little Turtle statue by Robert Koepnick. The bronze statue of the chief of the Great Miami Indians was dedicated in 1988 and similar to Tecumseh, stands watch along the Ohio River. It is one of seven statues along the Riverwalk that also includes John James Audubon, James Bradley, Daniel Carter Beard, Mary Becker Greene, Simon Kenton, and J. A. Roebling. 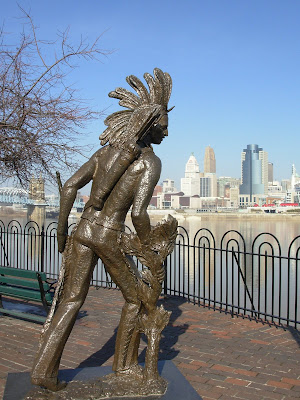 References:
Save Our Seminary
City of Cincinnati City Parks
History of Cincinnati and Hamilton County
Inventories of American Painting and Sculpture, Smithsonian
Posted by Dan at 7:29 PM

Another great post - I had no idea the Sayler Park statue was there.

My trip over to Riverwalk was just for you Veggie.

In 1909 the village of Home City was officially renamed Sayler Park in honor of its first Mayor, Nelson Sayler.

In 1909 the village of Home City was officially renamed Sayler Park in honor of its first Mayor, Nelson Sayler.

The article is great, I just get hung up on the "Saylor" misspelling. But it's common, even from life-long residents.