The Terrace Plaza Hotel
Probably my most controversial choice to date but as an early piece of modernist architecture, I actually like it. I might be in the minority here. Completed in 1948, The Terrace Plaza Hotel at 15 West Sixth Street was designed by the New York architecture firm Skidmore Owings and Merrill (SOM) for Thomas Emery & Sons. Emery had developed the Carew Tower & Netherlands Plaza hotel over a decade prior. It was one of the first major building projects in Cincinnati after World War II and one of the first modern buildings in downtown Cincinnati. In true modernist style it typifies the "form follows function" mantra. Interior uses are reveled on the exterior through the changing and manipulation of the form. However there is little to no architectural ornament – just changes in the materials of brick, steel, and glass. The project was widely published while still in design and shortly after completion. 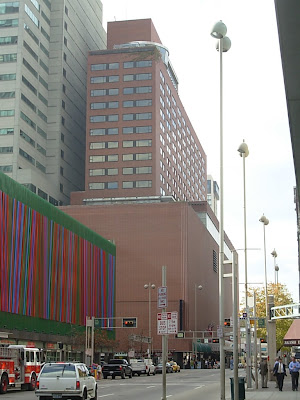 However what was not published, and what I have always found fascinating about the building, was that it was designed by a woman, a rare thing in mid to late nineteen forties. Natalie de Blois was the "Design Coordinator" for the project in SOM’s office. She was 24 years old when design work began. She had responsibilities through most all phases of the project. Interestingly though she was never taken to meet with the clients and as of a 2002 interview, she has never even been to Cincinnati and seen the completed building. (The transcript of that interview is here, from the Art Institute of Chicago, Chicago Architects Oral History Project. It is fascinating!) Born in 1921, she graduated with a degree in architecture from Columbia University in 1944. Within a year she would be working at SOM. She left SOM in 1974 and moved to Texas where she practiced architecture and eventually taught at the University of Texas at Austin from 1980, through 1990. Conceptually the Terrace Plaza is and was a mixed use building. Similar, I guess you could say, to The Carew Tower complex. The first seven floors were commercial space that housed offices and two department stores – Bond’s and J.C Penny’s. Hotel guests took elevators from the ground level to the 8th floor where the main lobby was located along with dining rooms, meeting spaces, and a large outdoor plaza. (Which in the wintertime was converted to an ice skating rink.) Hotel rooms were located on the 9th through 17th floors. The 18th and top floor contained another, yet round, dining room and an outdoor garden. All the interiors furnishing and fixtures were customed designed, included Rookwood Pottery ashtrays for instance. 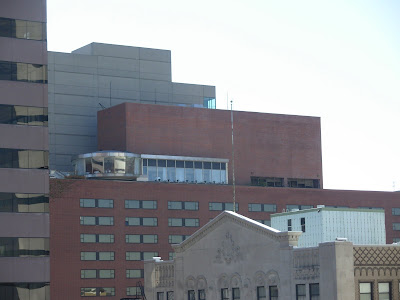 Art was also an important part of the building and was coordinated through SOM’s office. Alexander Calder created a mobile, "20 Leaves and a Apple", for the Lobby. Joan Miro painted a mural for the circular, Gourmet Room restaurant on the top floor. And Saul Steinberg designed the "Mural of Cincinnati" for the Skyline Restaurant on the 8th floor. When the Terrace Plaza was sold to Hilton in 1965, these pieces were given to the Cincinnati Art Museum. The pieces by Calder and Miro are currently on permanent display near the Café. The Steinberg mural, however, had long been in storage but was restored and on display this past summer at the Art Museum. I, like Sara Pearce, hope it can be permanently displayed somewhere in the future. To appreciate this building one really needs to step back and view it as a whole composition. Looking at it while walking in close proximity on Vine or Sixth Streets just does not do it justice. I know there are place to "modernize" the building and re-make it into The NEXT Hotel & Residences. But in my opinion, it is already modern. Adding funky glass patterns and planes maybe makes it more modern but that may not be an improvement. It just needs some restoration of some lost features . . . and that different perspective I was talking about. All historical postcards and photos from the Greetings from Cincinnati website.
Posted by Dan at 11:55 AM

This sentence: "To appreciate this building one really needs to step back and view it as a whole composition." sums it up for me.

I often think that if the Terrace was located on the fringe of downtown, with unabstructed view of it, it would be more popular.

To each his own.

An overlooked building that has magnificent history. A few pieces you missed:

- There was a spice garden for the chef's private use next to the Gourmet Room.

- There is a projection room that is attached to the Skyline Room, a lot of the old equipment is still located up there.

- The kitchen entrance to the Skyline Restaurant was the first to use the Stanley Automatic Door System which used electronic eyes mounted on posts outside of the door to detect when the field was broken, open the door, and shut it again when the inside beam is broken. There was the original 1947 manual in the drawers of the maintenance room attached to the projection room.

I found a coin in my house that has lotsof vintage stuff and came across a Terrace Plaza coin that has a picture of the same hotel on the front with font that says erected in 1948, the back has font that says first anniversary july 19 1949. Does anyone know about this, email me at leggerbg@yahoo.com, thanks.

Hello there, everyone. I'm a local filmmaker who's been asked by a historical preservation group in Cincinnati to put together a brief documentary on the Terrace Plaza Hotel. As you know, it's recently been closed and the future of the building is uncertain. We're hoping the film will make an impact with the city so we can save this important part of Cincinnati's history.

In our film, we'd like to include brief interviews with people who have fond memories of the hotel. Perhaps you and your family ate in the Gourmet Room? Maybe you had attended a party there? Did you work there, or stay in any of the rooms? Or maybe you just remember all of the excitement from when it was being built? We're open to anything, so if you're interested, please email me at nicole.desender@gmail.com and tell me a little bit about your experience.

I apologize for not being able to offer any financial compensation for your time (as we weren't afforded a budget) but we'd be very grateful for your help. Thank you all for your time and consideration!

i'm so pleased to have found this history. i have the commemorative rookwood ashtray from my parents' wedding night stay at the terrace plaza in 1948 - a rectangular black one dated '47. perhaps a different design for the honeymoon suite?! i never knew what a spectacular place it was, and hope for its proper preservation. best, pamela

Like the previous poster, 1948 was a special year... for me, as a nine year old kid, the Terrace was nothing like the hotels in my limited experience. I mean, who the hell decided to put a lobby eight floors up?
We had a corner two bedroom suite and twin beds that doubled as couches beneath a wall mounted bolster. At the touch of a button on the bolster, the beds moved out from beneath the bolster ready for sleeping. My younger brother burned out one of the motors!
We ate in the Gourmet Room too, with the mural and Calder mobile. I watched hypnotized as it continually moved all through dinner but then when the waiter set a finger bowl in front of me I was completely lost. It even contained a sprig of mint.
Hadn't the slightest glimmer of what this course could be but since it came with a fresh napkin I was about to drink up when my mom caught my eye, saying it was to wash one's fingers following the meal.
Well, la-dee-da... where had I been for the last nine years...never got one at home nor anywhere else~! Still that stay at the Terrace (which really was on the cutting edge) remains a fond memory after all these years. Good to find other's remember as well!

I stayed at the Terrace Hilton for six weeks in 1972. I found it to be a very very interesting building and recall the shops on the first floor along with "Joes Bar" not to mention the lobby on the 9th floor. In 1972 professional sports teams also used the hotel on a regular basis.